Being able to repeat commands or statements is a very powerful tool. We learned this previously when working with while loops. For loops work in a similar manner; however, for loops are used to iterate(repeat code for every element or item) over a sequence or other iterable objects. If you were to use a for loop to go run through a sequence, such as a list, it would look like: 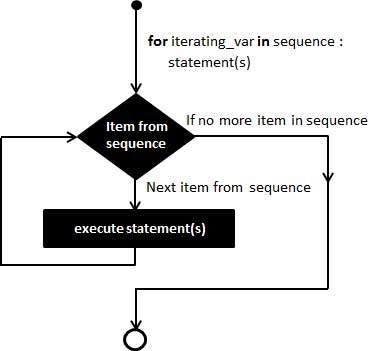 On each iteration, the item or element that is next in the sequence is assigned to the iterating_var. Then, the statement(s) are executed. The loop continues in this fashion until all the sequence has been processed. But what is a sequence anyways? Well, a sequence in Python is an ordered collection. Sequence types in Python include strings (sequence of characters), lists (sequence of elements), and tuples (finite ordered list). Lists are very similar to arrays in languages like Java; however, arrays are fixed sized data structures whereas lists can grow dynamically as you add elements. Tuples are like lists lists, but instead of being growable, they are finite, immutable, or not able to be modified once created. Let’s look at a few basic examples of using for loops to iterate over these data structures:

Notice that in all the loops above are iterating over the values contained inside the sequence and not the index. For the purposes of this tutorial, let us define a function to help print out a list. This is going to be quite helpful as we move forward in exploring lists. We will cover the details of how functions work in a later tutorial, but a function acts as a reusable reference to a set of statements, much like a loop. To use a function, we can simply call it by referencing its name, followed by parentheses and any parameters or data it requires.
The function below will print the contents of a given list with both the value AND the index. This is done using the enumerate function that is built in to Python. Enumerate will keep track of the index of each value as the loop iterates. The enumerate function produces a two item tuple on demand. The first item in the tuple is the index, followed by the value.

Now that we can output our list easily, let’s check out some of the common built-in functions for lists. All the functions can be found here.

To add an element to a list, you can use the append function:

Notice that the new element is added to the end of the list it is being appended to. The append function adds to the end of a list, but what if we want to add or change a value elsewhere? To change the value at any given index, we can simply access the index and assign a new value:

Elements can also be inserted at specified locations by using the insert function. This will shift all the elements in the list that come after the specified index over one, so like the remove function, be aware of this extra computation in case your lists are very large!

Apart from adding, we can also remove elements:

If you want to remove every occurrence, you must loop through the list manually:

If you want to delete a specific item, you can do so by using del followed by what you want to delete. This works for many objects other than just lists; however, to delete something inside a list, you can use the following syntax: del my_list[index_of_value]. The code below deletes the value at index 5 in the fruit list. This is the most recent "tomato" added:

With the del functionality and the enumerate function, we can improve the performance of our previous attempt at removing all occurrences of a value:

Another useful function apart of lists is the index function. This will return the index of the first occurrence of the specified value in the list.

We can also slice parts of a list just like with strings! Thankfully, it’s the exact same syntax: sequence[start:end:optional_step]

There is a great deal more functions that are not part of the list object, but are a part of the general Python language. These functions can still apply to lists! The filter function is particularly useful. This function removes all elements of the list that do not pass the given lambda expression. We will save the discussion about lambda expressions for a later date, but you can think of them as a mini function.

List comprehensions are a very concise and readable way to create lists in Python. It is done by using a set of square brackets that have an expression and at least for clause inside. The first for clause, can be followed by more optional for or if clauses: [expression for thing in things]

Remember from our previous lectures that bubble sort is a simple sorting algorithm that compares each pair of elements in a sequence and swaps them if they are out of order. This is repeated until no more swaps are made.